CAR T cell therapy is a novel type of immunotherapy that has demonstrated unprecedented efficacy in haematological cancers, with complete remission observed in up to half of treated patients, bringing new possibilities in oncology that are yet to be fully explored discovered.

Evolving cancer care
The treatment of cancer has historically been limited to chemotherapy, radiotherapy and surgery. However, in the last two decades, we have seen remarkable advances with the development of targeted therapies that have resulted in greater efficacy and reduced toxicity. Researchers have also focused their efforts in the field of immunotherapy to identify and extract the full potential of the immune system in the fight against cancer.

CAR T cell therapy
The manufacturing process of CAR T cells is complex and requires a highly skilled trained force (Figure 1). The first step of the process involves the extraction of unstimulated white blood cells from the blood via a procedure called leukapheresis. Once the T cells have been extracted and separated from other blood cells, they are genetically modified to express receptors that enable them to recognise specific antigens present in tumour cells. To generate therapeutic doses of CAR T cells, the cells are subsequently expanded in the laboratory. Lastly, CAR T cells are delivered to the patient via a single intravenous infusion, which is preceded by a regimen of lympho-depleting chemotherapy to maximise the success of the therapy. The treatment process, from leukapheresis to product delivery, takes approximately 17 days. 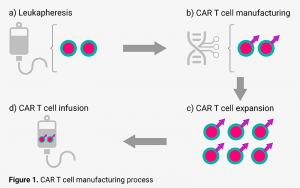 CAR T cell therapy has developed rapidly over the last few years. The unprecedented successes seen with this novel type of cell-based immunotherapy resulted in the approval of the first two CAR T cell therapies (Kymriah® and Yescarta®) by the FDA in 2017 and by the European Commission the following year. These therapies are indicated for certain haematological cancers, including diffuse large B cell lymphoma and transformed follicular lymphoma. Both therapies contain genetically engineered T cells that specifically recognise and target CD19+ B cells, including tumour cells.

Unprecedented efficacy
The high specificity of CAR T cells makes them extremely effective at attacking cancer cells with impressive rapidity. In their respective pivotal trials, Kymriah and Yescarta were evaluated in patients who had progressed on at least two lines of systemic therapy, and, remarkably, up to 50% of treated patients achieved complete responses. While a complete response does not necessarily mean that a patient is cured, it indicates that all signs of cancer have disappeared.

Achieving such a high proportion of complete responses in patients who had already been heavily pre-treated is unprecedented. Importantly, cancer remission is maintained over time, with CAR T cells being detectable in the body for as long as 20 months. These benefits also translate into impressive survival rates that had never been observed when a therapy was used so late down the line.

Challenges
Despite the remarkable results that CAR T cell therapy has produced, there are some challenges that limit its use in earlier treatment lines. The toxicity profile of CAR T cell therapy is unique and substantially differs from what is seen with traditional chemotherapies or targeted agents. The most common adverse reactions seen with CAR T cell therapy are cytokine release syndrome (CRS) and immune effector cell-associated neurotoxicity syndrome (ICANS), both of which can be life-threatening.

ICANS
Neurotoxicity is the second most common serious adverse reaction seen with CAR T cell therapy, with an incidence of up to 67%. Affected patients may experience confusion, inability to communicate, lack of coordination, seizures and, in a worst-case scenario, cerebral swelling, which can be fatal. While ICANS is not thought to be related to CRS, anti-IL-6 therapy is often successful in treating some forms of this disorder. For the management of cerebral swelling, anti-IL-6 therapy is ineffective and patients are managed with corticosteroids.

Costs
Unprecedented successes generally bring high costs, and CAR T cell therapy is no exception. In the US, treatment with Yescarta costs $373,000 per patient and treatment with Kymriah costs $475,000 per patient. The high price tag partly comes down to the complexity of these therapies, which require treatment personalisation for each patient. Importantly, these costs do not include hospital stay, HCP care or the need for additional medications, which could bring the total cost to over $1M per treated patient.

Solid tumours and beyond
The impressive success of CAR T cell therapy has been limited to haematological cancers, with treatment in solid tumours yielding mixed results. The immunosuppressive environment and physical barrier of solid tumours reduces the ability of CAR T cells to penetrate, persist and expand within the tumour. Moreover, solid tumours may evade CAR T cells through upregulation of immune inhibitory receptors such as PD1/PD-L1 and CTL4. Nevertheless, animal studies have shown promising signs that these challenges may be overcome by combining CAR T cells with checkpoint inhibitors.

While these are still early days for CAR T cells, the unprecedented efficacy shown by this therapy in lymphoid cancers has led to great interest in its applications in other haematological cancers and solid tumours. A number of preclinical studies are currently ongoing investigating strategies to mitigate the toxic side effects of this immunotherapy, which can be fatal if not promptly treated. Once such strategies are devised, CAR T cell therapy could likely be used as early as first line for the treatment of many cancers. Overall, it is clear that CAR T cell therapy has opened a new avenue in the way we treat cancer, and the many opportunities it will bring to oncology are yet to be unveiled.