A lifetime of scientific communication.

Professor Trevor Jones, one of the country’s leading pharmaceutical scientists, talks about the importance of scientific communication and the most exciting trends within the pharmaceutical industry. 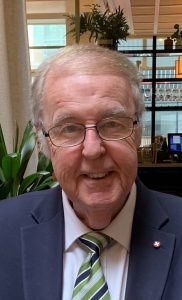 Professor Trevor Jones is one of the country’s most distinguished pharmaceutical scientists. It is difficult, in only a few lines, to do justice to his rich biography – you should check out his extensive Wikipedia entry for the full story, but to summarise, he is a visiting professor at King’s College, London and holds honorary degrees and Gold Medals from six universities. From 1987-94, he was a main board director of The Wellcome Foundation, where he was responsible for R&D including the development of AZT, Zovirax, Lamictal, Malarone.  He was a member of The UK Government regulatory agency The Medicines Commission and has served as an advisor to the Cabinet Office on the Human Genome project and Chaired the Government Advisory Group on Genetics Research.  In 2005 he won the SCRIP Lifetime Achievement award for his contribution to the pharmaceutical sciences industry and in 2003 was awarded a CBE.

Professor Jones very kindly agreed to be interviewed as part of Cognite’s focus on the importance of bringing science to life within the world of medicine. The professor is widely regarded as one of the industry’s foremost communicators.  A video of the interview can be viewed here. In the following article, he answers questions about the importance of scientific communication and what he sees as the most exciting trends within the pharmaceutical industry.

As someone who spent their career as a scientific communicator, what are your views on the importance of bringing science to life?

The trouble is that people regard science as something remote rather than affecting their everyday lives. They are often cynical or afraid, particularly in my field of life science and medicines. We have seen this with reactions to the Covid vaccine, with some people expressing concerns about whether it is safe. We have also witnessed how wild theories and misinformation can be spread online where there is a vacuum of knowledge.

It’s really critical that we try to explain things, but in a way that makes it clear that we don’t have all the answers. As the Swedish philosopher and science fiction author, Poul Anderson, said, ‘I have yet to see any problem, however complicated, which, when looked at in the right way, did not become still more complicated.’  This is a thought that has kept me going throughout my research life and is particularly pertinent when you look at what is happening within the world of medicine, with the science becoming far more complex and invariably posing more questions than answers.

I spend a lot of my time giving presentations to different groups, from rotary societies to undergraduates, on a wide range of subjects such as stem cells, digital health, epilepsy and or, nowadays, coronavirus.  The role of a communicator is to demystify, for example by showing how a particular drug solves real problems and presents opportunities to the patient and the public at large.  But in the same way that we shouldn’t claim to have all the answers, we shouldn’t try to pretend that things are simple, especially in life sciences where we are dealing with increasingly complex topics.  Our job is to make things intelligible or comprehensible rather than simple.

Communications techniques are important.  I find that the use of apparently clever metaphors to explain complex scientific processes can confuse rather than clarify.  It is also all too easy to flood your audience with too much information. Instead, I tend to use pictures, because, just listening to somebody talk is one thing – and that ‘Welsh preacher’ stuff can work at times – but having illustrations that people can follow, without actually listening too much to the words, is really vital.

What excites you about recent developments drug science?

It goes back to Poul Anderson – the complicated issues are becoming even more complicated.  We used to believe that we understood certain diseases –  we described them by a name and, in the case of cancer, thought of if them as a single condition. Drugs have classically been discovered by saying, ‘there’s a target, there’s a pathway … I just need to interrupt that and I can kill it.’  When we developed AZT, the first ever drug  for HIV, my team knew that the virus had to reproduce inside a cell and to do that it had to use some of the cell’s ingredients.  We inserted a chemical that mimicked one of those ingredients but was sufficiently different that the virus couldn’t cope with reproducing it and, as a result, the harmful virus reproductive process was stopped. That was the way we did things – we thought ‘single target, single drug’ and it worked well, but it doesn’t work that way anymore. We have come to recognise that there are many different potential pathways.

I have just become chair of the  Drug Discovery Company e-Therapeutics.  This company looks at all of the networks that are taking place in the cells, in the brain cell, in the skin cell, in the kidney etc. We can ask a computer to look at how these interrelate and then ask the computer ‘if I put in this chemical or that chemical does it truly disrupt that network?’  … and now I’m onto something quite interesting.  Obviously, this requires the understanding of science at the genetic level.

We cure infectious diseases from bacteria – all the rest of diseases, currently, we only treat.  But over the past 5-10 years we have started to understand genetic linkages and to contemplate the idea of replacing the genes that have gone wrong.  There is an amazing new science called CAR-T Therapy in which you take samples of the patient’s immune system (their T-cells) insert “killer” genes into them in the laboratory then infuse them back into the patient to target and destroy cancer cells.  Also, CRISPR gene “editing” where we detect a specific bit of a gene in the body that is going wrong and replace it with the correct sequence, so it works correctly. I believe that over time such advances will lead to cures form many diseases

This is the approach that is being taken with many of the coronavirus vaccines. We’re cheating the body. We’ve identified the genetic composition of those little spikes on the surface (the corona) of the virus. We then make the gene that is the precursor of the spikes, wrap them up in either a micro-dispersion or include them in another harmless virus and inject them into the body. The spikes  then form in your body but cannot grow into live viruses The body thinks, what’s that? I don’t like it. and your immune system makes antibodies that can arrest the whole virus and stop it from entering your cells, also triggering the release of   T-cells to kill invading whole viruses.  While gene manipulation is going to cure a lot of diseases, it isn’t without its complications, not least the risk of ‘friendly fire’ creating new problems if we don’t precisely target the right gene.  This is a long way from how we used to find new medicines, relying on chance discoveries that certain plants found in your garden have medicinal properties.

The areas of gene manipulation, gene therapy and gene replacement are where we’re going to see the biggest advances over the next decade, especially when linked to the use of artificial intelligence to map things in ways that we haven’t been able to do in the past. By combining our understanding of genetics with artificial intelligence, we can make a big difference to people’s lives.  This is also why it is important to explore  and combine different kinds of science and different kinds of technology  not just  focus on your particular area of specialisation. The future is exciting and we will at times surprise ourselves with what we are able to do.

Share:
Read more:
San Francisco seeking to be the world’s top biotech cluster
Read more
1 June 2022
What next for mRNA?
Read more
9 May 2022