Our favourite medical science books of 2021

Books that have brought medical science to life in 2021, from developing vaccines to exploring our DNA and musing on mortality.

Our list of the best (popular science) medical and biology books of 2021 is not surprisingly dominated by COVID-related titles. It includes Vaxxers (Sarah Gilbert and Catherine Green’s inside story of the making of the Oxford AstraZeneca vaccine), Spike (by Jeremy Farrar, a member of the SAGE emergency committee) and Covid by Numbers (by leading data scientists Professor Sir David Spiegelhalter and Anthony Masters). There is also room for a couple of ‘left-field’ choices – The Code Breaker (Walter Isaacson’s biography of genetic scientist Jennifer Doudna) and The Seven Ages of Death: A forensic pathologist’s journey through life (part detective story, part celebration of the marvels of life and inevitability of death). All do a brilliant job at bringing the medical science to life. 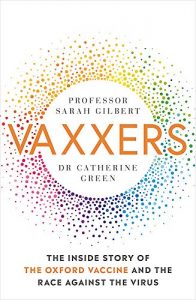 Vaxxers: The Inside Story of the Oxford AstraZeneca Vaccine and the Race Against the Virus

There aren’t many scientists who receive a standing ovation from the Wimbledon Centre Court crowd, but the public praise for Professor Sarah Gilbert for her work in developing the Oxford-AstraZeneca Covid vaccine underlines the level of scrutiny under which she and her fellow scientists were working during much of 2020. Vaxxers, co-authored by Professor Gilbert and her colleague Dr Catherine Green, describes the gruelling effort and intense pressure that accompanied the vaccine’s development, from early news of an outbreak in China to an effective vaccine within only 12 months. As an insider’s perspective on lab science, Vaxxers has few equals. 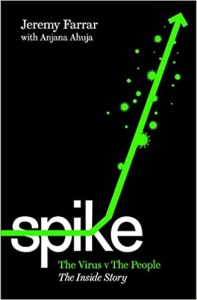 Spike: The Virus vs The People – the Inside Story

This book is written from the perspective of an insider within the SAGE emergency committee during the pandemic. Jeremy Farrar is one of the UK’s leading scientists, head of the Wellcome Trust, and an expert in emerging infectious diseases. His book provides a fascinating insight into the decision-making processes, during a fast-moving and often uncertain situation, in which the interests of scientists and politicians were not always aligned. He also finds room for a broader analysis of the role of vaccines and the politics of vaccination in dealing with some of the world’s biggest health challenges. 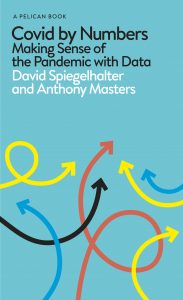 Covid By Numbers: Making Sense of the Pandemic with Data

The pandemic has underlined the public’s difficulty in interpreting data and making sense of statistical information – a problem shared by many in the media and most of our politicians. Sir David Spiegelhalter has spent a career trying to tackle this ignorance, and his latest book, co-authored with RSS Statistical Ambassador Anthony Masters, gives us the tools to make sense of the numbers behind the virus, judge the effectiveness and consequences of measures such as lockdowns. This is an important book, at a time when fake news, much of it underpinned by the misuse or wilful misinterpretation of data, continues to erode public trust in the media and other institutions. 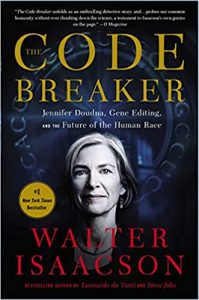 The Code Breaker: Jennifer Doudna, Gene Editing, and the Future of the Human Race

Walter Isaacson has built his reputation with blockbuster biographies of Leonardo da Vinci, Steve Jobs; Einstein, Benjamin Franklin and Kissinger, so his choice of Nobel Prize winning scientist, Jennifer Doudna for his latest book underlines the growing focus of the publishing world on medical science. Her work on gene editing has been described by no less a figure than James Watson, as the most important biological advance since his co-discovery of the structure of DNA. Her creation of a tool to edit DNA, known as CRISPR, has opened-up exciting medial possibilities from the study of our genetic code but Doudna also wrestles with the moral dilemmas associated with gene science. 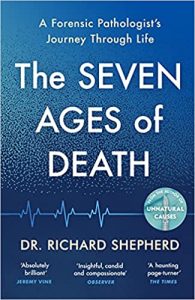 The Seven Ages of Death: A forensic pathologist’s journey through life

In his book, Dr Richard Shepherd, Britain’s top forensic pathologist, describes how by focusing on death, he will ‘take readers on a journey through life’. Despite the macabre subject matter his message is both positive and enlightening. He focuses on 24 of his most intriguing cases, using the results of the autopsies to unlock the secrets of life – each of the bodies has something to reveal about human development and mortality. It is a powerful, moving and above all reassuring book about death and life – how to understand it, how best to postpone it, and, when our time comes, how to embrace it.

The history and role of randomised controlled trials in medicine

The changing face of biotechnology