Why US biotechs increasingly choose Switzerland for their European HQ

Why a combination of talent, tax, environment and infrastructure makes Switzerland a particularly attractive option for US biotechs.

A few years ago, it was not uncommon for US biotechs to focus entirely on their home market. However, in more recent times, cost controls have led these companies to seek additional returns by taking a more global route. Once that decision is made, Europe with over 20% of the world healthcare market becomes a key target for expansion, although successfully launching a product there is complex1. In addition to time zone and language issues, each country has its own rules and regulations that need to be navigated.

There are 3 possible ways forward: licencing out the product; partnering with another company; or going it alone.

The first of these is the lowest cost, lowest risk approach but can mean sacrificing 60-75% of the asset value1. The second option means a company deciding what it wants to do for itself and finding a partner to help do the rest. The final route of going it alone is potentially the riskiest but also the one that if successful will bring in the most returns. Perhaps unsurprisingly, the first or second options have proved most popular with companies whose products require a traditional marketing approach but today there is a new wave of targeted and personal medicines coming on stream, 50% of FDA approvals are drugs with an orphan designation. These do not need the scale and infrastructure previously associated with success in Europe. Instead, they may be handled by a central multifunctional team with very small number of people in each local market. Examples of companies that have blazed this kind of trail are Vertex, Intercept, and Alnylam2.

For these go-it-alone biotechs, a very important decision is where to locate their European HQs. There are a number of biotech hubs across Europe with the largest being in France, Germany and the UK. These account for half of the continent’s biotechs companies, although the fastest growing hubs have been France, the UK and Switzerland, with the latter doing particularly well in attracting US biotechs3.

The rise of Switzerland

Undoubtedly, favourable tax regulations and an established financial reputation have helped to make Switzerland attractive but there are many other potential reasons. It is a stable, democratic country situated in the middle of Europe and has been ranked as the world’s most innovative country for 10 years in a row by the UN Global Index. Particularly important for biopharma companies is that life sciences figure prominently in the country’s economy.  Two of the world’s pharmaceutical giants, Hoffman-La Roche and Novartis, are Swiss and based in Basel, whilst there are also Vifor Pharma in Zurich and Lonza in Valais. In addition, 90% of the biggest biopharma and biotech companies have a significant presence there, many of which have been attracted by the infrastructure, including great universities and Institutes of Technology.4

The potential for R&D collaboration and growing talent pool reinforces Switzerland’s position as a biotech stronghold and helps it attract the new wave of go-it-alone biotechs, as evidenced by these examples of US start-ups in the greater Zurich area, including Zug: Apellis, Reata, Deciphera, Global Blood Therapeutics, Stemline and Arvelle.4 Last but not least is the collaborative vision of the country itself 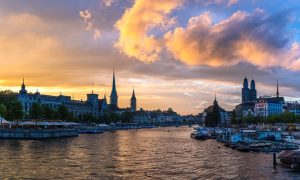 “We want to be the location of choice for forward thinking companies and talent from Boston and other regions of the US and the world when they want to expand internationally’ 4 Relo Sidler, Head of Communications and Marketing, Greater Zurich Area

Share:
Read more:
San Francisco seeking to be the world’s top biotech cluster
Read more
1 June 2022
What next for mRNA?
Read more
9 May 2022